A SONG APART – a novel by Jeffrey H Baer 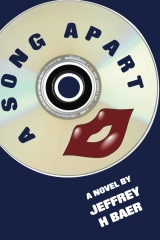 What is your book all about?

A SONG APART revolves around Shannon Kistler, a rising young pop star, and Kevin Derow, a college student and Shannon’s unlikeliest fan. They meet and fall in love while defending their life choices from an unforgiving segment of society.

What inspired you to write the book?

Back when MTV cared about music, they aired an interview with Public Enemy leader Chuck D. The question of meeting fans on the street came up, to which he replied “To us, it’s thirty seconds. To them, it’s a lifetime.” So I thought, Hmm…what if it were longer than thirty seconds for “us”? And as a fan of Debbie Gibson since “Shake Your Love,” I thought a gender-role reversal would make the story more appealing.

What is your target audience for the book?

Anyone, including Authors’ Lounge members, who enjoys reading hidden gems as well as bestselling novels.

What do you hope readers could get out from your book?

Enjoyment, enlightenment, and the sense that the average person has stories worth telling too.

What are your future goals/plans for the book?

And something more about yourself.

I was diagnosed with Asperger’s Syndrome in 2002, but I’ve had it all my life. It’s been a rocky road in situations requiring good social skills like school and work. There’s no cure or treatment for any form of autism, and sometimes there’s no sympathy for it either. Nevertheless, whenever the opportunity presents itself, I try to encourage others like me to use their special gifts.

Being autistic means I view the world differently from whom are known as neurotypicals. This is especially true in my writing; as much as I’ve enjoyed bestselling novels over the years, I always thought there should be stories about the everyman as well. THE STRICKLAND FILE, for example, revolves around a college graduate coping with office politics at his new job. Fellow writers were all but sure no one would read about something people already endure every day, but I regarded it as a challenge in itself to write.

My girlfriend Karen and I live in Coney Island, the home of Nathan’s Hot Dogs. In addition to writing fiction, I sing, play three instruments and compose songs with software. One day I’ll perform my own material on the boardwalk karaoke stage, but that will be a summertime event.