The God I Left Behind by Brian Holley 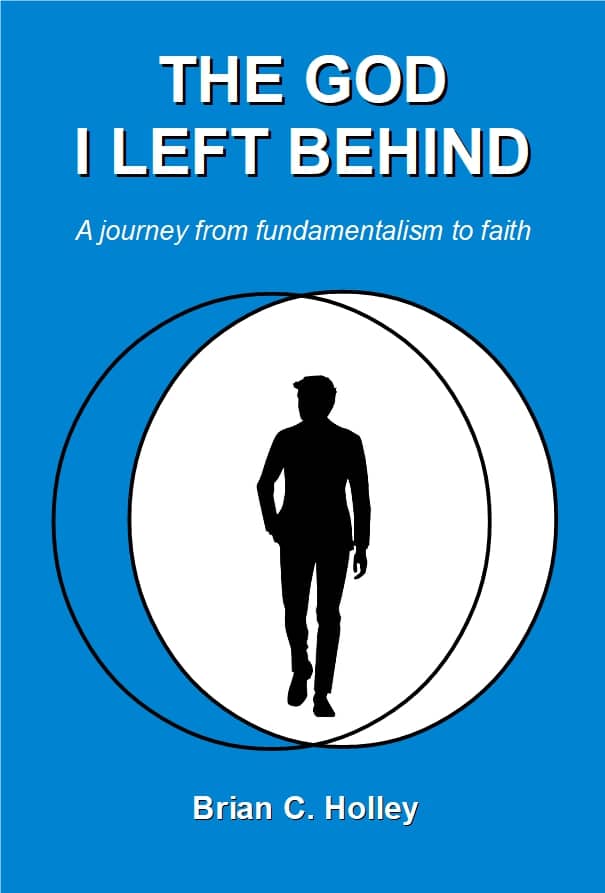 I was walking with my sister beside Lake Cayuga in Upstate New York when, out of the blue, she asked, “Hey, Bri, Where are you with God?” It wasn’t something I’d been asked before and I mumbled some sort of reply. I imagine my mumbling gave my sister the clue that this wasn’t territory I wanted to be in and she kindly didn’t pursue the matter.

We stopped off in New York City on the way home to England and the question dogged me everywhere we went—Central Park, the Metropolitan, Broadway, Times Square—you name it, it was rumbling away in the back of my mind. When we got home I wrote a couple of thousand words on the subject but it really wasn’t adequate. In the next few years I wrote 100,000 words and sent it to a publisher via a friend. He very politely pointed out that I wasn’t a theologian or a guru and all I could really write about with any authority was my personal experience.

A number of years later, and with a lot of support from my publishing contact and my wife, Liz, who has a Masters in English Literature, I completed The God I Left Behind. In it I describe how I had a profound experience of silence, aged nine, which left a longing in me and led to a lifelong search for peace. As a very insecure young man I had become a passionate fundamentalist evangelical Christian. (You would not have wanted to know me in those days!) By the time my sister asked that question all that had evaporated. That was after I’d been able to reflect sensibly on the experience as I became aware of the evolution and workings of the ego-self. So the biographical part of the book is really a practical demonstration of how the ego can get us into all sorts of trouble.

Most of the book is devoted to deconstructing my Christian faith. This I wrote to help the many others I know are contemplating or going through this process, or who are evaluating their spiritual lives in some other way. So by no means do I negatively destroy everything I once believed, but I do reveal that belief is no substitute for inner experience and that that experience need not depend on believing stuff at all. In fact, I found the deeper I got into the experience, the less I needed theological beliefs. I came to recognise that my life had been one long process of shedding—especially during the last 25 or so years. I think I’ve reached a place where I have no religious beliefs at all and describe myself as a ‘spiritual tramp and religious has been.’ Having said that, I am nevertheless deeply influenced my many spiritual sources including the Upanishads, Bhagavad Gita, Tao Te Ching and, yes, the Bible. I love reading books by Richard Rohr, Alan Watts, Eknath Easwaran, Ramana Maharshi, Joseph Campbell, Robert Sardello and others of that ilk. Maybe some followers of the Readers Magnet Club will recognise these authors. If not, I recommend them.

I’ve always had an inclination to write, and got a start professionally working as a programmed learning writer and analyst in the 70s. But it was when I was working as a careers adviser that my writing began to flourish. Mostly, I wrote careers information leaflets, but out of work I wrote articles for magazines and a whole load of poetry. In fact I became chairman of a poetry workshop group and we performed at the Cheltenham Literary Festival. During this period I did a lot of freelance journalism which paid for three daughter’s weddings and a trip to America. This experience led me to become a full-time freelance journalist and subsequently a training consultant.

In 2012 I published a collection of poetic prose called From the Secret Cave. It contains 170 sutras distilled from my journal which I started while touring Japan in 2008. In 2009 I was diagnosed with Kidney cancer and the offending organ was removed. In 2012 I had an adrenal gland removed and it was during the long recuperation from that operation that the sutras flowed out of me over a period of about a month. At that time, The God I Left Behind was still in draft form and I didn’t complete it until 2014. After a number of rejections I decided to self-publish on Amazon, which was easier than I could have imagined.

During the Lockdown I completed the first draft of a book called Beyond Ego, and wrote a novel with a spiritual theme called The Other Side of Beyond. I’ve also produced a paraphrase of five Upanishads drawn from four English translations and a collection of my poetry. These I intend to publish over the coming months. As with all my books, profits go to good causes. Thanks for the opportunity to share.