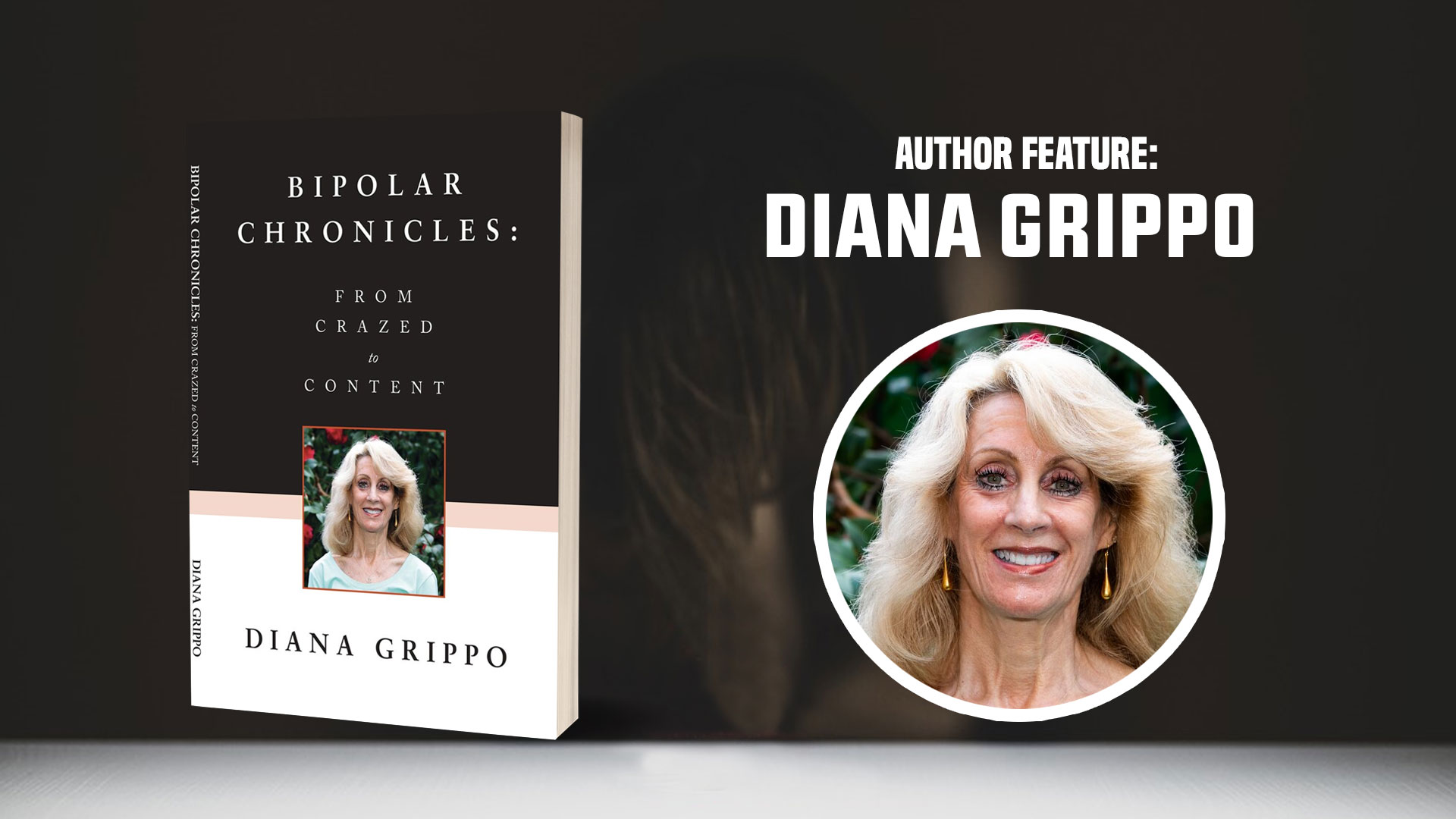 Diana Grippo is the author of the inspiring memoir and self-help book Bipolar Chronicles: From Crazed to Content.

Diana Grippo is the author of the book Bipolar Chronicles: From Crazed to Content which is a haunting but also inspiring memoir about one woman’s battle with Bipolar Disorder. Her condition brought her to dark places and, in many ways, traumatized her. Yet Diana found the strength to fight back, and today she is winning.

Diana Grippo’s life changed shortly after graduating from UCLA. She began hearing voices that would keep her up at night. She recalls that there were times she didn’t sleep for nights, or days, on end. Diana engaged in impulsive behavior, including spending or giving away all her money. Being away from her family, Diana had no one to confide to about her condition, and eventually, she ended living in the streets. The streets can be scary, and while living in the Tenderloin section of San Francisco, California, Diana experienced many horrible things. She experienced being gang-raped and was lucky to be alive.

“In my state of mind, I concentrated on the anger I felt at them for having taken my boots. I was livid, and this kept me from being as traumatized as I might have been. I got picked up by the police for walking barefoot on the freeway. The painted lines were softer on my soles. They brought me to a psych ward on a “5150” – the police term for admitting someone to the hospital. I went in and out of hospitals and was misdiagnosed as schizophrenic and given the wrong drugs.” – Diana Grippo, Psychology Today, April 9, 2021

Many years later, Diana Grippo was diagnosed as manic-depressive and given lithium which helped stabilized her for many years. Although it reduced manic episodes, Diana was still in a depressive state. Yet, she never stopped pursuing her lifelong dream, which is becoming a teacher. One time, she happened upon Dominican University of CA and thought, ‘This is where I’m going to get my Teaching Credential.’

After graduating from UCLA in Economics, Diana eventually got her Teaching Credential at the Dominican University of CA. Diana taught high school English, Psychology, and Computer Applications for several decades. She ran a mentor program called Youth Outreach Media Mentor Program (YOMMP.) It’s a program that shows students how to write, storyboard, direct, edit, shoot, and produce shorts, documentaries, and feature films. Students are encouraged to choose a cause they are passionate about and incorporate them into their production.

Diana Grippo joined Apple in 2012. She currently works in sales for Apple. Aside from her professional work, Grippo spends her time sharing practical techniques and tips on handling Bipolar Disorder to both people who are depressed and the people who support them.

Diana Grippo has been dealing with bipolar disorder for more than thirty years, from the manias to the depressions but can manage it well. She now works in Palo Alto, CA, and lives in Mountain View with her cat named Lucky.

Last June 2021, Diana Grippo finally published her memoir Bipolar Chronicles: From Crazed to Content. The 196-page book also serves as a self-help guidebook for people experiencing the same challenges that Diana has somehow managed. The book is also available in digital form via Kindle.

In Bipolar Chronicles: From Crazed to Content, Diana shares how she learned to fight her depression with three primary coping mechanisms: a spiritual path, music therapy, and Dialectical Behavior Therapy. Readers will be inspired by Diana’s life journey from living on the streets to finding a job, working as a sales representative for Apple, one of the biggest companies in the world. In this powerful work, Diana provides hope and education to those experiencing the difficult journey of Bipolar disorder, both patients and their families and friends.

Bipolar Chronicles: From Crazed to Content helps readers on how to:

· Find options for coping with depression

· Feel less alone and isolated in your journey to healing

· Support and assist a loved one who is suffering

To know more about Diana Grippo and her book Bipolar Chronicles: From Crazed to Content, you can purchase a copy on Amazon or visit her author’s website today.